This is your chance to build a dream team of your all-time favorite players from throughout sports history. Once assembled, pit your squad against historical teams or other users' Dream Teams using our free SimMatchup technology. Simulate a game for a detailed box score with play-by-play. We'll even track the wins and losses!

Dream Teams are free, too. Once you're a registered user, you'll have 3 Dream Teams within each sport at your disposal. If you reach the playoffs in our SimLeague or Dynasty Games, you'll earn more Dream Teams! 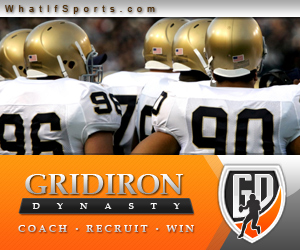 Once you've perfected your Dream Team roster and watched them knock off the '00 Sooners, '99 Seminoles, & '01 Hurricanes, it's time to take it to the next level -- now's the time to begin your college coaching career in Gridiron Dynasty.

Start off as a coach in Division III, then rise through the ranks until there's the press conference announcing you as the head coach of your favorite DI football program.

Gridiron Dynasty has it all including: