We've recently made some changes to the success/job promotion model. Those changes include a new weighting on how we measure success for an individual season, providing additional benefit for consistency (consecutive post-season appearances) and taking into consideration your length of service at the school (for example, making the national tournament with none of your own recruits is not equivalent to making the national tournament with all of your own recruits).

I have only been at my school for 3 years, but have all my own recruits. Which is the "length of time" based on, just seasons at a school or do they look at recruits on the team when determining that aspect of the new change? (clarebear - Hall of Famer - 2:16 PM)

Experience is a running total from your 1st season in HD in that world - every season it increases and it increases more for conference tournament games and post-season games (the higher pressure the game, the more experience it earns you). So a National Championship won in Season 1 would still help your resume in Season 23 with regards to additional experience.

Success, reputation and loyalty are hardlines in the sand - you either have what they are looking for or you don't. Schools will make considerations for less experience based on your success so not only will being very successful over your past 4 seasons increase you chances of landing a job, it will also increase the number of schools which would consider you.

will players drafted play a role in promotions? and will they ever be listed by coaches, instead of school? btw. consecutive tourney appearances and drafting your own players are very good additions to the game. (farmlife - Hall of Famer - 2:46 PM)

Currently players drafted do not play a role in job promotions. Internally it has been discussed but there are two opinions - one is that you already receive benefit for getting kids into the NBA when you recruit and the other opinion is that an AD may find that appealing in that getting kids to the NBA would bring more noteriety to the school. Regardless, it's certainly something we can add to the coaching records page.

IRL, there is little movement from DII to DI (a lot of DI jobs are filled by DI asst.'s which HD doesn't have). Currently it seems that Elite DII success is valued less than two seasons of mediocre DI success. Is sustained DII success going to carry more weight than mediocre DI success, esp. if the DI coach hasn't been at their DI long? Thanks. (Rails - Hall of Famer - 3:00 PM)

Sustained DII success will carry more weight now that we are giving bonuses for that (in addition to the regular benefit that you'd receive by have 4 consecutive succesful seasons). That said, we feel that the weighting of DI to DII to DIII is correct and that hasn't been changed. It is much more difficult to be succesful at low level DI for numerous reasons (you have roughly 50 more schools in DI, the difference in prestige from the top to the bottom of DI versus DII, etc.).

Are these changes going to be retroactive? Meaning is my job status going to improve if I have made the post season the last three seasons? (jerico18 - Hall of Famer - 3:02 PM)

Yes, that's correct. The last 3 seasons in each world for every team has been re-evaluated using the new logic.

Does being on probation effect the effort/success of the players on my team since they essentially know there is no hope for the post-season? (kevinbigham - Hall of Famer - 3:03 PM)

No, they play the same regardless of the probationary status of the school.

will the prestige of schools (or lack thereof) affect the hiring process? I've said for a very long time that you cannot hold Duke and Quinnipiac to the same standards (as in expecting Quinnipiac to make the postseason every year). So will a winning season at a less prestigious school have equal weight to a postseason appearance by a major prestige school? (homerjoe1973 - Hall of Famer - 3:08 PM)

Yes and no. The baseline success is measured without regard to expectations - bonuses for consistent post-season bids/success is based on expectations so getting Quinnipiac to the post-season (combination of NT/PIT) does carry more weight than if you're doing the same at Duke. Also, when it comes to your job status, that certainly is taken into consideration as well - 4 consecutive PIT bids may get you an 'exceeding expectations' review from your AD at the Q while the same at Duke may put you 'in jeopardy'.

You mentioned to me in past tickets that you're working on implementing a "prestige" rating for each school in some form. This seems to tie into job promotions a bit as you could take a team from low prestige to high prestige, or whatever scale you rank it on. Any updates on what you plan to do w/ the listing of school's prestige level and when? Thanks. (taz21 - Hall of Famer - 3:15 PM)

Yes, that's correct and that's still in the works. You'll be able to see the prestige of any team from their team profile page. This was the first step in that change as it's quite extensive on the backend.

What was the biggest challenge you faced in making the change? (Rails - Hall of Famer - 3:25 PM)

Couple of challenges - I think the common reaction when coaches compare resumes is to look primarily at the post-season - and not to say that's incorrect, but there are numerous other factors which go into defining the success of a season (most of which have been mentioned above), e.g. is the team that finished the regular season ranked #1, #1 rpi, 30-0 record and then upset in the 2nd round more/less successful than the team sneaks into the tournament with a high rpi, unranked and then reaches the sweet 16? It's not as clean cut as it may appear on the surface.

In addition to finding that right balance when measuring success for a single team, we then need to find the right balance when we're going across divisions - how should a DII national championship stack up to a DI team making the PIT - who had more success?

Is the weight given to the PIT changing? still roughly correct that getting to the PIT final four is about equal to a trip to the Dance? (fd343ny - Hall of Famer - 3:35 PM)

If all else was equal between two team's seasons (wins, rank, rpi, sos, etc.), and 1 team made the NT and lost their first game the other won the PIT, the team which won the PIT would receive slightly more credit. This is a slight decrease in PIT value from before.

"(for example, making the national tournament with none of your own recruits is not equivalent to making the national tournament with all of your own recruits)" - Will these changes affect recruiting as well? Will the resume of a coach be able to impress a player you a are recruiting as well as an AD looking to hire a coach? (appleseed1 - Hall of Famer - 3:37 PM)

Yes, your own personal success as well as the success of your school both play a role in recruiting.

Will weight be given to coaches who can turn around a major rebuilding project school, which might miss the postseason during some of those seasons? If you inherit a 4 win team and take it to 18 wins, consistently within a season or two, will that count for something? (homerjoe1973 - Hall of Famer - 3:38 PM)

Currently no, we do not look at where the school was when you inherited them when it comes to making hiring decisions. That is taken into consideration when it comes to your job status though.

is there an advantage for coaches returning to a world, as far as not needing to have "recent success"? (vondanger - Hall of Famer - 3:40 PM)

No, their success is updated as soon as their last season concludes so even if they take 10 seasons off, their success will not change since the season they left.

How much will one not-so-successful season impact a resume, assuming it follows three fairly successful seasons? Does the most recent season hold more weight? (toothdoc7 - Hall of Famer - 4:10 PM)

They are weighted in descending order so the most recent season carries the most weight of the 4, 2 seasons ago the 2nd most weight, etc. so your 4th season will carry the least weight.

Can you clarify what category "job status" would affect, and how much weight it is given? (toothdoc7 - Hall of Famer - 4:15 PM)

Sure, job status is shown on your office. That's your standing within the eye's of your school's administration. This is really only a concern once you reach DI in which your job status can range from 'exceeding expectations' to 'in jeopardy' and can eventually lead to a firing. Job status is based on your success relative to the school's expectations.

Was the intent of this change to better balance say 5 straight seasons of NT bids while only advancing to the second round against 2 bids in 5 years but with a sweet 16? And which of those would be more highly valued now? (combalt - Hall of Famer - 4:18 PM)

No, we felt that the current system was pretty good but could be improved. By going more indepth and looking at other factors (consistency, your recruits vs. other recruits, etc.) we think it will improve the hiring process.

It was primarily based on HD resume comparisons. We want the logic to match what coaches are expecting - if a coach loses a job to another and they say "sure, I can see that", then we're happy that the logic is working as expected.

If Simmy says a coach has all the qualifications a school is looking for, why do some coaches get the instant rejection? (Weena - Hall of Famer - 4:24 PM)

Simmy knows about success and experience but not reputation or loyalty so while he may see it as a good fit for his client, the AD may balk at the loyalty/reputation or both. The letter from the AD should explain the rationale.

you just used the word success a lot and said that it's hardlined. How is success defined then, as it certainly can't be black and white or just NT appearance. (homerjoe1973 - Hall of Famer - 4:26 PM)

Everything evaluates to a numerical value behind the scenes. As long as your numerical value exceeds the schools minimum success, then you have a shot at that job (assuming experience is within reach and loyalty/rep are acceptable).

Will these changes address some of the errors that occurred recently in the hiring process, or is that a completely separate issue? (And if so, what is the status on that fix?) (daalter - Hall of Famer - 4:28 PM)

Yes. That's not say there won't be further refinement. It's nearly impossible to test every possible combination of resume.

Yes - that's one of the reasons RPI (with it's warts and all) is used in real life - to try to accurately compare the strength of wins/losses.

Is Simmy going to give us some sort of clue as to which school is more prestigious? For example, a candidate may be qualified at both Iowa or Minnesota. Is one more prestigious than the other? (Rails - Hall of Famer - 4:30 PM)

Once we add prestige to the team profile, you won't need Simmy for that - but he's going to take the same cut as before. He is an agent after all.

Who has the better record - a coach with PI, PI. PI. Final Four or a coach who has 4 consecutive 1st round losses? In the past it has seemed that the FF coach was more likely to be promoted. (Weena - Hall of Famer - 4:31 PM)

Assuming the Final Four occurred in the most recent season, that coach would have the advantage in hiring.

As always, thanks for taking the time to post your questions. 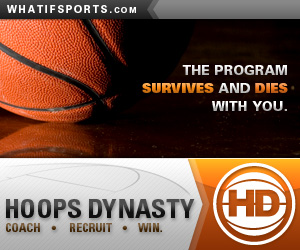