We have started development on a very significant SimLeague Baseball upgrade. It's an upgrade that will see us move our technology forward so that it will be easier for us to do more frequent, smaller updates in the future. This update, however, is a large one as it includes a new user interface and many, many new game features. We have been posting screenshots in the forums and will continue to do so. This chat is so everyone can fire away with questions about what will be coming and get quick responses for any and all suggestions.

How about once and for all fixing the bug where if a reliever comes in and allows a runner on something other than a hit or a walk (like an error or a HBP) it does NOT count as a batter faced, when it should count? (donaldjtrump - Hall of Famer - 1:06 PM)

This is a LIVE specific bug and one we've wanted to fix for years. However, it can't be fixed until our LIVE player is re-written (which is coming after the upgrade in development). Long story short: the code that accounts for this bug was written in an old language we can no longer update.

Yes - in addition to the desktop website being upgraded, we are putting together a WAP site with core functionality. After this upgrade is out, we have plans to develop an iOS app for SLB. We are way behind where we should be in mobile, and this upgrade allows us to catch up quickly.

Will their be a new league format which will be what MLB is using in 2013: 15 teams in each league with all-season inter-league play and the extra wildcard playoff with a knockout round? If so, also suggest that whatever pitcher is used in the knockout round game is not allowed to pitch game one of the division series, thus creating an extra-advantage for the #1 seed in each league. Is this possible? (futurekid6 - Hall of Famer - 1:09 PM)

It will not be part of this upgrade, but we are obviously aware of the change and making sure our new system can accommodate. It'll be nice to see it pan out in MLB and we will carry it over to a new schedule format.

Will I be able to make use of a pitcher as a pinch hitter or a fielder as a pitcher (when appropriate)? (plangster - All-Star - 1:10 PM)

Not in this upgrade, but we are making the necessary adjustments so it can happen in a subsequent update. This may sound like an "easy" one on the surface, but it is a really big challenge based on how the game was originally designed and coded.

Re: A Sortable Game Log When clicking on a player's game log, it would great if we could sort by the statistical categories already listed there. E.g., sort by RBI to see my player's top RBI games. I'd also like to sort by opponent. E.g., if I want to know how my pitcher's done against my playoff opponent, it would make things easier if I could see all his game stats against that opponent listed in order. (crazystengel - Hall of Famer - 1:11 PM)

This is definitely an adjustment we will make. I'll see if we can add it to the existing version of the game this week so you don't have to wait for the upgrade.

Is there going to be an *innings* limit added in addition to the normal pitch count limits? (grayfoxx - Hall of Famer - 1:13 PM)

Not yet, but we will introduce when we move to the revamped fatigue system we have lined up (a carry over from Hardball Dynasty). We're trying to segment certain update groups together so as not to introduce too many significant core changes to the existing game engine.

dead ball pitchers are a deterrent to the game - as for myself, there is nothing more thrilling than the beauty (real or in the imagery) of the long ball going over the fence, thus home run derby in the 60s or the all star competition. Who can say Joss would pitch well agst Mantle, ARod, Gehrig, Musial, et al? (basai - Hall of Famer - 1:15 PM)

"What If"... that's what we're trying to answer and statistics and mathematics allow us to answer some of those questions. But we understand the point of your question, which is why theme leagues that prohibit deadball era pitchers is the way to go if you don't like this aspect of the game.

A player's fielding percentage, range factor (except for catchers) and catcher CS % all play a role in the salary formula. In addition, players who can play multiple positions see a bump for their versatility.

Any changes being made to the LIVE play engine and window? (frozen_rope - Hall of Famer - 1:19 PM)

No and Yes. The initial upgrade will not include LIVE, but all the pieces we are writing for the upgrade will be used when we re-do LIVE. And we'll carry over the technology we used and learned with our Fantasy Football/Baseball live draft application on FOXSports when we re-do LIVE. We have a ton of exciting ideas to make LIVE way, way better than the way it currently is. It's coming, but one thing at a time - with each step making development of a new LIVE quicker on our end.

It will remain the same; however, we will be doing away with the Spring League season concept and replacing it with a first full-season free model. That way, newcomers to the game can enjoy a true season (with waivers, trades, new trade chat, promotions/demotions, etc.) and will hopefully stick around longer. We'll have to introduce some safety measures to prevent users wanting to take advantage of this with multiple accounts, but we already have those lined up.

Yes - this is part of the upgrade. Team owner will be able to drop X player(s) while adding Y player(s) in the same move.

There needs to be a way to view the play-by-play without first seeing the final score. We can hide the boxscore, but first we have to click on the final score to get to that page. (grayfoxx - Hall of Famer - 1:23 PM)

This already exists. Visit the User Settings page (http://www.whatifsports.com/mlb-l/usersettings.asp) and check the Hide Game Results box. We'll be doing this in a cleaner fashion in the upgrade.

No, but when there stats become more reliable we will consider. We do plan on introducing negro league players in a subsequent update for theme league play.

What advantage is a strikeout when the simulation determines that the batter is out before determining how he got out? (legaldh - Hall of Famer - 1:26 PM)

The advantage is the same in real baseball. Runners won't move up, no chance of an error, no potential exchange of baserunners.

Silver King pitched 584 innings in 1888 but did so with a shortened distance to the plate and 5 balls needed for a walk. Do you think the calculation expanding old time pitchers' innings should be toned down so Silver King 1888 is not projected to throw 703 innings? (legaldh - Hall of Famer - 3:13 PM)

We have this on our wish list. We've discussed several factors on why it can be done better than the way it is now (straight mathematical extrapolation). It won't be part of this upgrade, but it's one we'll continue to discuss.

Thanks to those that participated. We know SLB hasn't seen an update in a while and we are very excited on the upgrade being worked on. It's a long development cycle, but we'll be working with all of you (our customers) in the forums to make sure we aren't forgetting anything. Thanks

For more information or to join a league, visit the SimLeague Baseball home page. 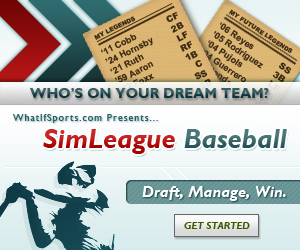